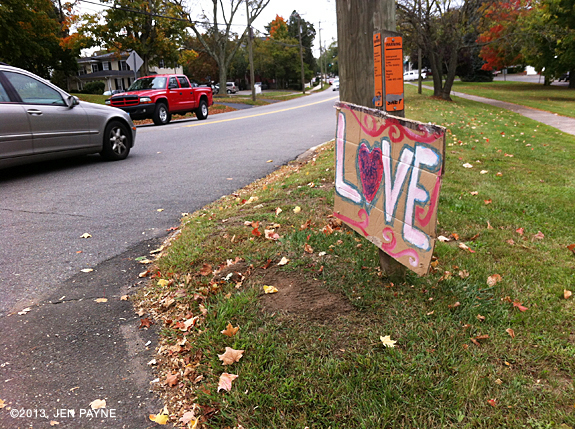 As I made my way into the polling place to cast my vote in the local elections yesterday, I passed by the opposition holding signs out front. By “pass by,” I mean I avoided eye contact and walked as far around them as I could given the plethoria of campaign signs and cars in the parking lot.

I didn’t even know who they were, really. But I knew they were holding red signs instead of blue ones, which means I shouldn’t like them. That’s what we do, isn’t it? Pick sides and fight for our team?

Later, I ended up in line behind the same sign holders at CVS as they boasted about their chances. And there it was — anger and division and hate — churning in my stomach.

In the tenor of speeches last night, as the red signs won out over the blue signs, there was the same sense of us-against-them. “Decisive Victory,” the headline read this morning.

Are you listening to the words? Opposition. Sides. Fight. Victory.

Throughout this year’s election season, I found myself wondering more and more about my actions. What purpose did it serve to distinguish myself as a blue sign as opposed to a red sign? What did I gain by aligning myself with one side or the other? Why did that alignment make me feel somehow righteous?

But I pushed these thoughts away — surely it is morally appropriate to stand up for what I believe to be the best course of action. How can than not be correct?

Once again I find the words of Krishnamurti filtering into my thoughts.

Is there righteous anger ever? Or is there only anger? There is no good influence or bad influence, only influence, but when you are influenced by something which doesn’t suit me I call it an evil influence. The moment you protect your family, your country, a bit of coloured rag called a flag, a belief, an idea, a dogma, the thing that you demand or that you hold, that very protection indicates anger. So can you look at anger without any explanation or justification, without saying, “I must protect my goods,” or “I was right to be angry,” or “How stupid of me to be angry”? Can you look at anger as if it were something by itself? Can you look at completely objectively, which means neither defending it nor condemning it? (Krishnamurti, Freedom from the Known, p 52)

The brain when faced with violence undergoes a rapid chemical change; it reacts much quicker than the blow. One’s whole body reacts and there is immediate response; one may not hit back, but the very presence of anger or hatred causes this response and there is action. In the presence of a person who is angry, see what takes place if one is aware of it and does not respond. The moment one is aware of the other person’s anger and one does not react oneself, there is quite a different response. One’s instinct is to respond to hate by hate, to anger by anger; there is the welling up chemically which creates in the system the nervous reactions. But quieten all this in the presence of anger, and a different action takes place. (Krishnamurti, Questions and Answers, p 23)

These words create such a shift in me, I cannot describe it. They dangle a soft veil of some intangible, other way of being in this world that is appealing to my soul — and yet there is so much clutter. Like those signs I had to walk by at the polling station yesterday: believe this way, think this way, good guys, bad guys.

I can see, vaguely, that there is another way to move about in this world, though I suspect it will take some time to clear the path.

6 thoughts on “When Signs Get in the Way”